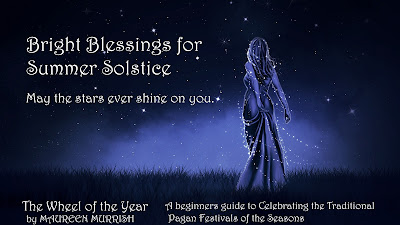 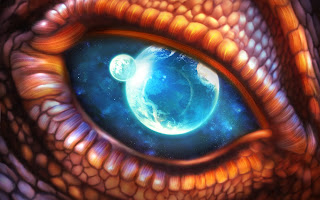 A BIG announcement for everyone who has been waiting for the third book in my Dragon World series. There has been many momentous things coming between its completion and publication including my book, The Wheel of the Year, but finally, The Forth Gate, is due to be released in time for Christmas.  I am really excited about its publication and will keep you informed of progress as the time goes by.
In the meanwhile here is a short taster.

Ribbons of smoke whipped and curled around the dragons' wings as they circled the burning village. Squat, bestial shapes ran from house to house with burning torches. Smoke billowed from barns and homes but there was little the villagers could do. They were farmers and ill equipped to fight off an attack by goblins and had taken refuge in the sky on their dragons. It was a scene Robby and Abigail were getting only too familiar with. The guard took up position above the village. The archers pealed away while the landing party dropped toward the earth. Robby caught a brief glimpse of Abigail as she joined the archers' formation then his dragon, Frenzel, followed the others toward the ground. He loosened the sword at his back and prepared to dismount as Frenzel levelled out. They skimmed a grassy bank and Robby leapt from Frenzel's back running a few stumbling steps, arms flailing, trying to regain his balance.
'Damn this new dismount,' he cursed under his breath as he tripped again only just managing to catch himself. 'It'll be the death of me.'
He felt Frenzel's amusement filter through their bond followed by his silent warning. Before Robby could draw his sword an arrow whipped past his head and embedded itself in a goblin running toward him, scimitar raised. Robby gave a quick glance skyward where Dimble and Abigail swooped around in a tight circle.
Thanks, Abs, he said silently knowing that through the link which Frenzel and Abigail’s dragon, Dimble, shared she would hear him.
Then he drew his sword and was ready when the next goblin pounded toward him.

Excerpt from The Forth Gate, book three of The Dragon World Series by Maureen Murrish. All rights reserved.

Dragon Eye illustration by kind permission of MaRoC68-d401vj5 at deviantart.

Find my books at:-  amazon.com/author/maureen.murrish
and:- https://www.smashwords.com/profile/view/onebluemoon
Posted by Unknown at 10:42 No comments:

Blessings at Yule everyone.  Though Yule is one of the Lesser Sabbats in the pagan calender it is, never the less, a magical time. We are all caught up with the preparations for Christmas now whether we are practising Christians or not.  But it is good to look to the reason many believe December the 25 was chosen to celebrate the birth of Jesus. And it is good to immerse oneself in the ways of the Old Ones and understand what this time of year has represented since long before the birth of Jesus. 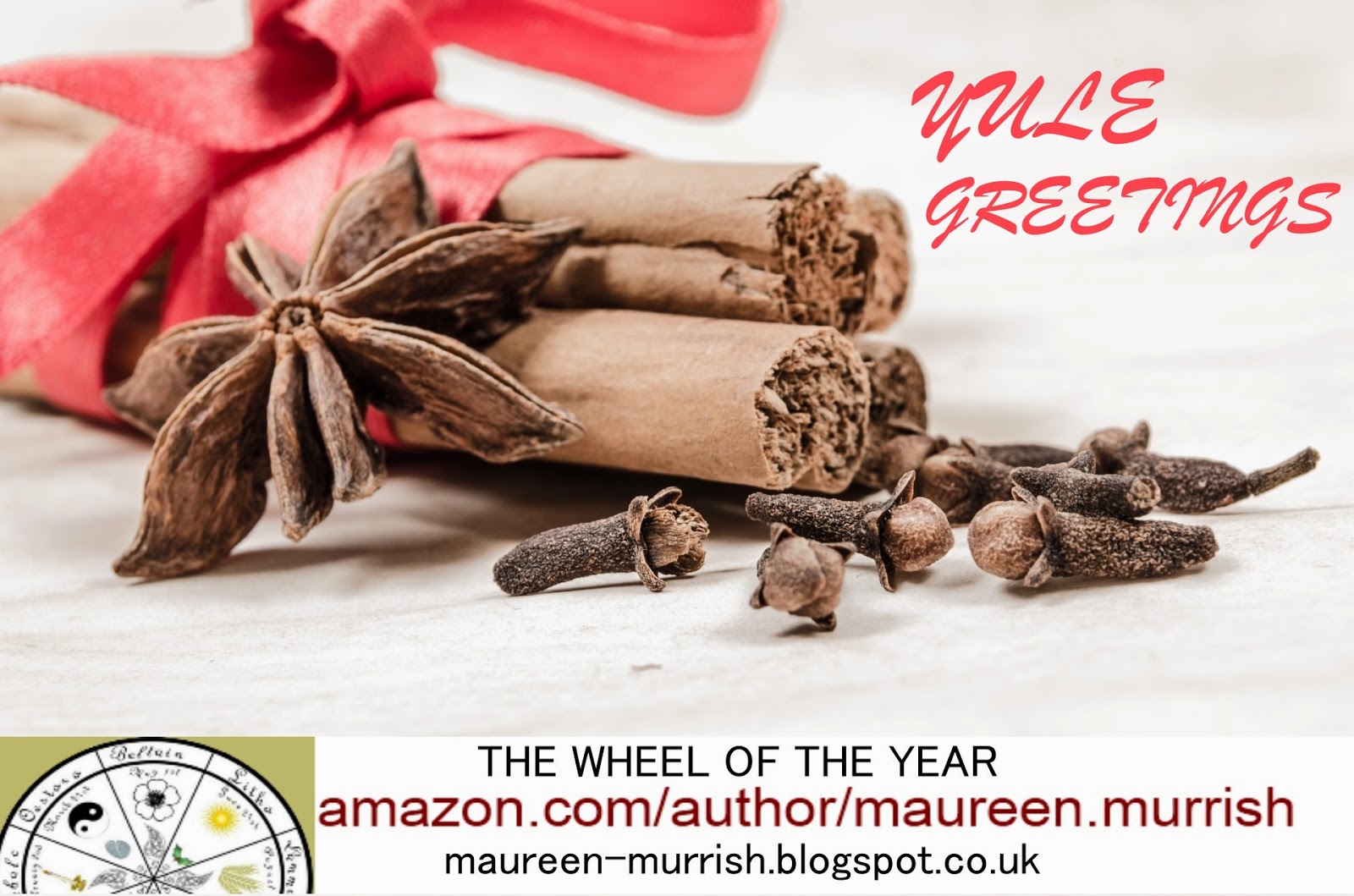 Excerpt from
The Wheel of The Year.
A Beginner's Guide to Celebrating the Traditional Pagan Festivals of the Seasons

Yule is the Winter Solstice. The Goddess is Crone while the God, still in the guise of Holly King relinquishes power to the re-born Oak King. The returned Oak King will guide us through the cold winter days while he slowly lengthens the days and prepares the land for Spring. This turning point of the year has been celebrated for many, many centuries. For the Norse and Saxon Pagans it marked the beginning of the New Year. The ancient Roman festival of Saturnalia celebrated the Winter Solstice. Their celebrations lasted for seven days during which time homes were decorated with winter greenery and there was dancing and feasting and gift-giving to honour the Oak King as the re-born sun. Sound familiar?
Workings now would ideally be for peace, harmony and love. The following spell for peace in the world is perfect. Or try the mediation designed to aid the fulfilment of your dreams.
Blessed Be
Posted by Maureen Murrish at 04:04 No comments:

Happy Valentine's Day everyone. May the love of your life sweep you off your feet. 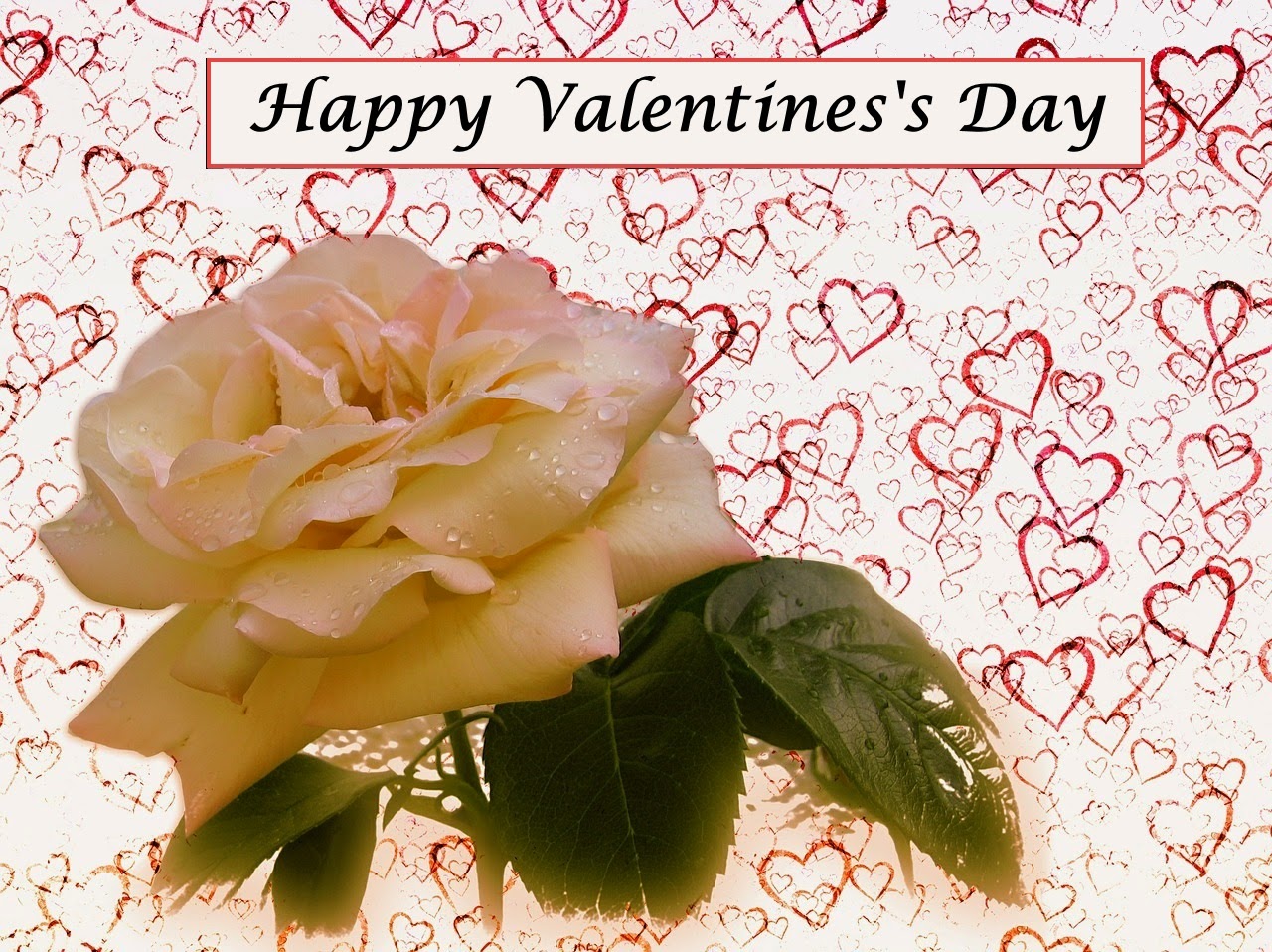 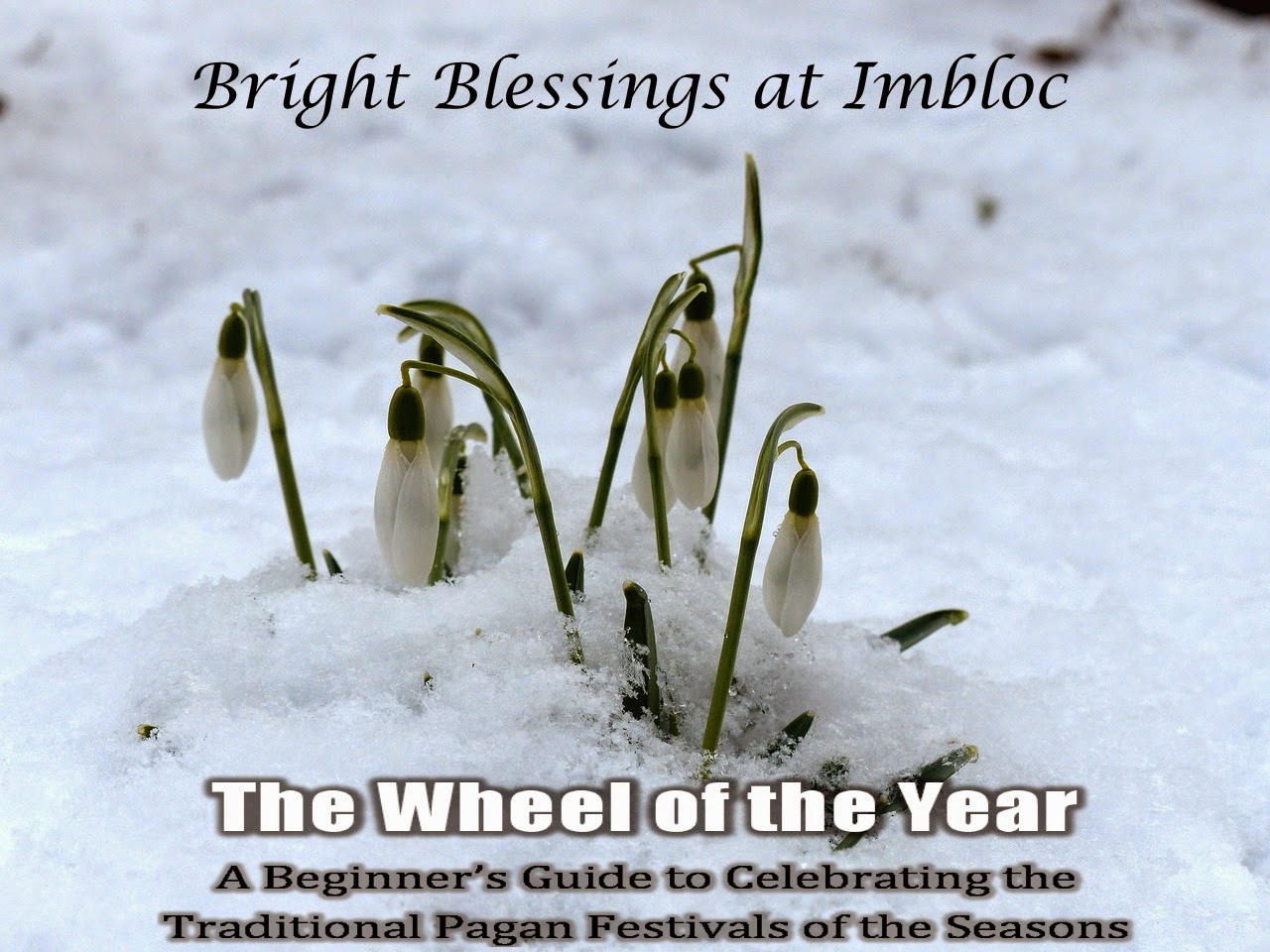 Could that be spring on the horizon? I hope so. I don't enjoy cold weather or cold weather sports or anything in fact that involves getting cold! So by Imbolc I am more than ready for the lighter nights and the sight of the spring bulbs pushing through. And that is what Imbolc is ultimately about - the warming of the earth, the promise of warmer weather and new growth. Though Imbolc is a Pagan festival it has been acknowledge in may other religions.
February the 2nd is Candlemas; a mass to bless the candles used in the following year. It is also the feast of purification of the Virgin Mary.
By Jewish law it took forty days for a woman to be cleansed following the birth of a son. And forty days prior to February 2nd is December the 25th.
From my book, The Wheel of the Year.

Posted by Maureen Murrish at 01:00 No comments:

Email ThisBlogThis!Share to TwitterShare to FacebookShare to Pinterest
Labels: Abigail's love of maps. From 'The Bonding Crystal' 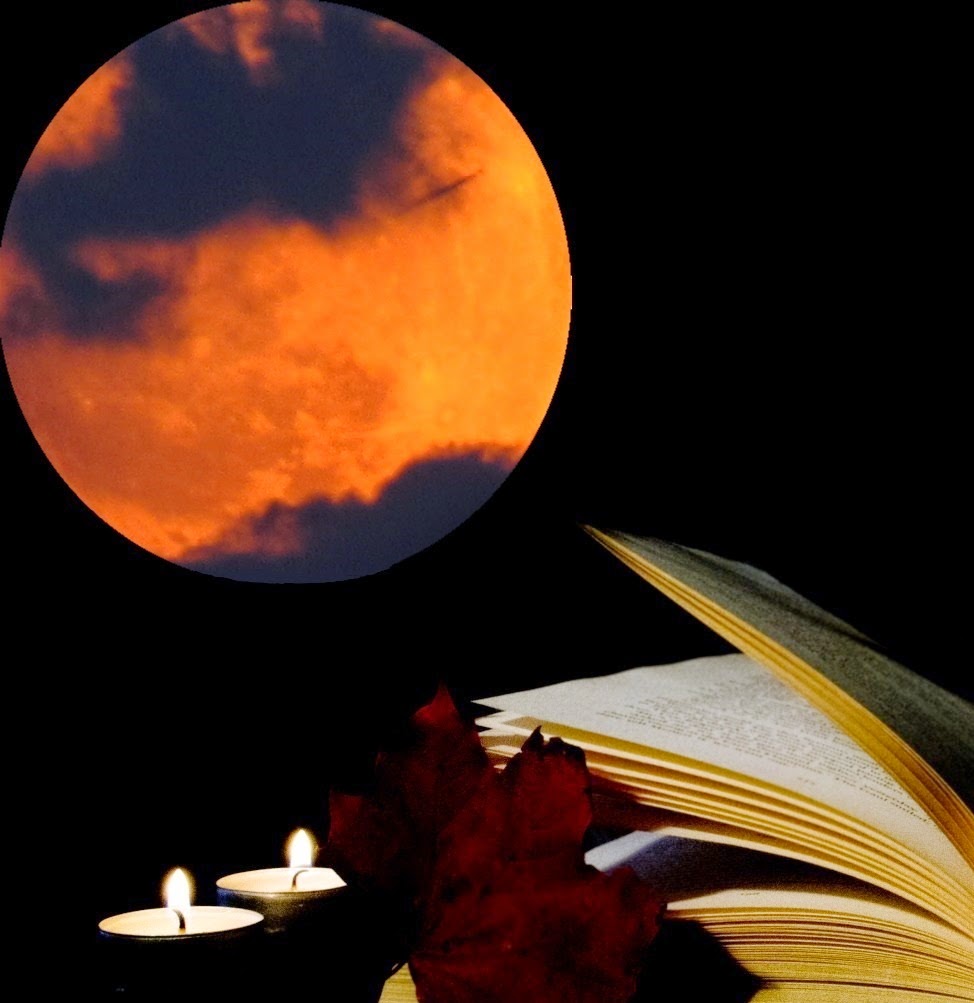 Happy Samhain everyone. Or at least Happy Samhain for next week, I'm a bit early I know.
Samhain (pronounced Sow-en), or Halloween as it is better known, is a special time for many reasons, let me share a few with you and some great ways to celebrate.


Samhain is both the end and the beginning of the Celtic and Wiccan year. It is often referred to as the Witches New Year. The name 'Samhain'  is believed to be a Celtic word which, when loosely translated, means 'summers end'.  This is a time when the final harvest is safely in and so it is appropriate to celebrate the fruitfulness of the land over the past year as it prepares to rest and regenerate through the winter. This is also the time when the veil between the physical world and the world of Spirit is at its most insubstantial so it is a perfect time to remember and honour our ancestors and perhaps hold a feast in their honour. Ideal magical workings at this time will reflect the Endings and New Beginnings theme of Samhain. I have included some spells and a Meditation in the next chapters.
Blessed Be.

Posted by Maureen Murrish at 02:20 No comments: 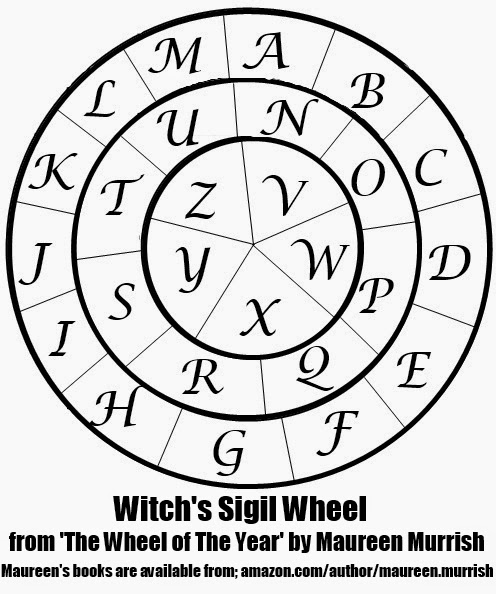 This is the downloadable Sigil Wheel. Its method of use is described in my book The Wheel of The Year. For a downloadable copy of the sigil click on the image.

The Wheel of The Year 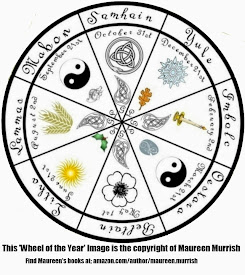 Click here for a downloadable image of the Wheel of the Year from my book. 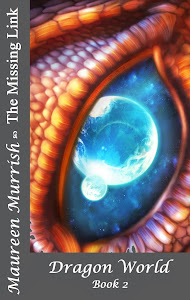 book 2 of the Dragon World Series 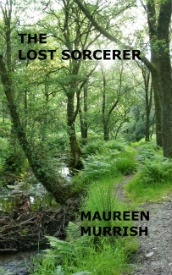 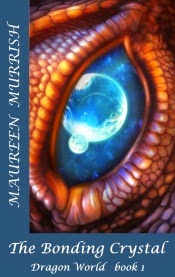